The Sunday Bible series has now hit 2 Samuel. Samuel has nothing to do with this book, having died early in 1 Samuel, but that's OK. this is still one of the best known stories, ever : The story of Joab. Joab, David's consigliore, is about the greatest ever at his job. All David's fighting & marrying & facing rebellions, Joab is there to keep things in line. When David was pulling his hair after the absurd death of Absalom, Joab was the one who told him to snap out of it and thank the guys who'd actually stood by him. We begin, of course, with the theme song. The only choice here is which version,


And the reading is 2 Samuel 20, Joab TCB:20 Now a troublemaker named Sheba son of Bikri, a Benjamite, happened to be there. He sounded the trumpet and shouted,“We have no share in David, no part in Jesse’s son!Every man to his tent, Israel!”2 So all the men of Israel deserted David to follow Sheba son of Bikri. But the men of Judah stayed by their king all the way from the Jordan to Jerusalem.3 When David returned to his palace in Jerusalem, he took the ten concubines he had left to take care of the palace and put them in a house under guard. He provided for them but had no sexual relations with them. They were kept in confinement till the day of their death, living as widows.4 Then the king said to Amasa, “Summon the men of Judah to come to me within three days, and be here yourself.” 5 But when Amasa went to summon Judah, he took longer than the time the king had set for him.6 David said to Abishai, “Now Sheba son of Bikri will do us more harm than Absalom did. Take your master’s men and pursue him, or he will find fortified cities and escape from us." 7 So Joab’s men and the Kerethites and Pelethites and all the mighty warriors went out under the command of Abishai. They marched out from Jerusalem to pursue Sheba son of Bikri.8 While they were at the great rock in Gibeon, Amasa came to meet them. Joab was wearing his military tunic, and strapped over it at his waist was a belt with a dagger in its sheath. As he stepped forward, it dropped out of its sheath.9 Joab said to Amasa, “How are you, my brother?” Then Joab took Amasa by the beard with his right hand to kiss him. 10 Amasa was not on his guard against the dagger in Joab’s hand, and Joab plunged it into his belly, and his intestines spilled out on the ground. Without being stabbed again, Amasa died. Then Joab and his brother Abishai pursued Sheba son of Bikri.11 One of Joab’s men stood beside Amasa and said, “Whoever favors Joab, and whoever is for David, let him follow Joab!” 12 Amasa lay wallowing in his blood in the middle of the road, and the man saw that all the troops came to a halt there. When he realized that everyone who came up to Amasa stopped, he dragged him from the road into a field and threw a garment over him. 13 After Amasa had been removed from the road, everyone went on with Joab to pursue Sheba son of Bikri.14 Sheba passed through all the tribes of Israel to Abel Beth Maakah and through the entire region of the Bikrites,[b] who gathered together and followed him. 15 All the troops with Joab came and besieged Sheba in Abel Beth Maakah. They built a siege ramp up to the city, and it stood against the outer fortifications. While they were battering the wall to bring it down, 16 a wise woman called from the city, “Listen! Listen! Tell Joab to come here so I can speak to him.” 17 He went toward her, and she asked, “Are you Joab?”“I am,” he answered.She said, “Listen to what your servant has to say.”“I’m listening,” he said.18 She continued, “Long ago they used to say, ‘Get your answer at Abel,’ and that settled it. 19 We are the peaceful and faithful in Israel. You are trying to destroy a city that is a mother in Israel. Why do you want to swallow up the Lord’s inheritance?”20 “Far be it from me!” Joab replied, “Far be it from me to swallow up or destroy! 21 That is not the case. A man named Sheba son of Bikri, from the hill country of Ephraim, has lifted up his hand against the king, against David. Hand over this one man, and I’ll withdraw from the city.”The woman said to Joab, “His head will be thrown to you from the wall.”22 Then the woman went to all the people with her wise advice, and they cut off the head of Sheba son of Bikri and threw it to Joab. So he sounded the trumpet, and his men dispersed from the city, each returning to his home. And Joab went back to the king in Jerusalem.David’s Officials23 Joab was over Israel’s entire army; Benaiah son of Jehoiada was over the Kerethites and Pelethites; 24 Adoniram[c] was in charge of forced labor; Jehoshaphat son of Ahilud was recorder; 25 Sheva was secretary; Zadok and Abiathar were priests; 26 and Ira the Jairite was David’s priest. 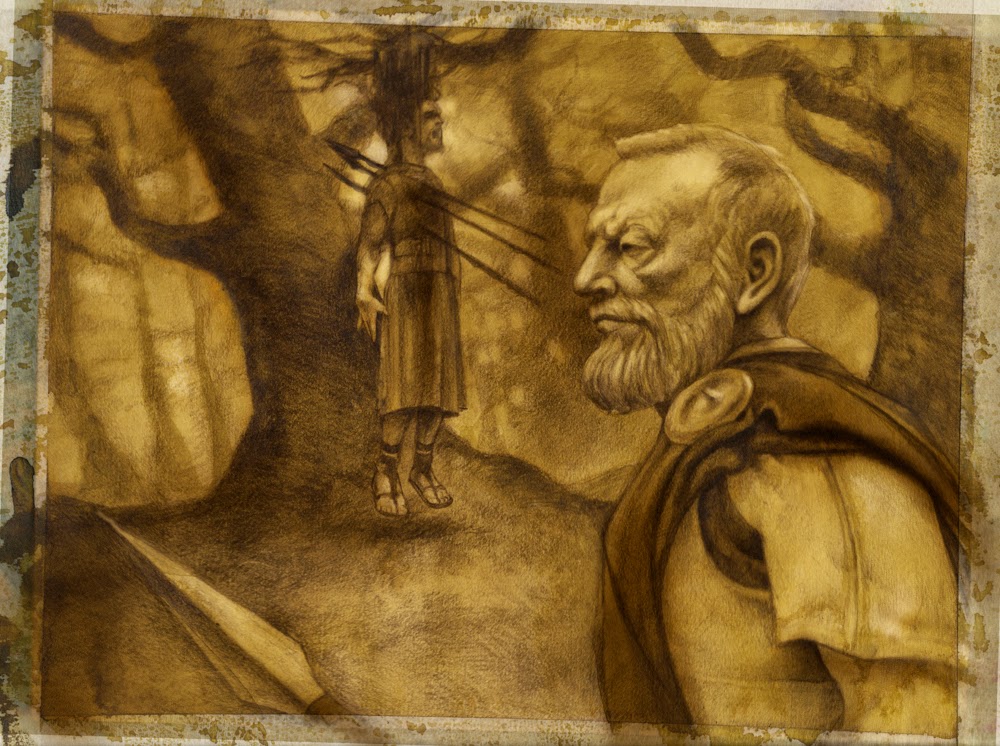 (Picture by Zach Franzen - http://atozach.com/2010/08/31/joab-and-absalom/ )
5 Once again there was a battle between the Philistines and Israel. David went down with his men to fight against the Philistines, and he became exhausted. 16 And Ishbi-Benob, one of the descendants of Rapha, whose bronze spearhead weighed three hundred shekels[b] and who was armed with a new sword, said he would kill David. 17 But Abishai son of Zeruiah came to David’s rescue; he struck the Philistine down and killed him. Then David’s men swore to him, saying, “Never again will you go out with us to battle, so that the lamp of Israel will not be extinguished.”
18 In the course of time, there was another battle with the Philistines, at Gob. At that time Sibbekai the Hushathite killed Saph, one of the descendants of Rapha.
19 In another battle with the Philistines at Gob, Elhanan son of Jair[c] the Bethlehemite killed the brother of[d] Goliath the Gittite, who had a spear with a shaft like a weaver’s rod.
20 In still another battle, which took place at Gath, there was a huge man with six fingers on each hand and six toes on each foot—twenty-four in all. He also was descended from Rapha. 21 When he taunted Israel, Jonathan son of Shimeah, David’s brother, killed him.
Posted by Downpuppy at 3:28 PM No comments:

1 Samuel! You thought there'd be no Bible on Easter? Hah! It is to laugh.
Today's book is a tale of succession, planned by The LORD, that makes Lear look orderly. Rather than a full chapter, I have to post bits, because the plot is too strong. But I haven't missed the theme song!