A Listicle from the Gray Lady

Lacking the fun & excitement of being in the path of a major hurricane likely to destroy my house, I was pulled into a Tom Levenson tweetstorm about a New York Times list of Trump business ventures. The article is basically just a listicle, grouping 60 ventures by type and sorting them into 3 slightly misnamed categories. "Didn't work out" seems to mean "Never got started", "Had problems" seems to be "Failed" & "Measured Up" means someone did OK with it.

The weaknesses Tom noted in this method are very real. Are these licensing or employment deals? Who has control (1)? Who had a real financial stake? Is it a real product of use or someone, or a fraud? Who's zooming who? The case of Trump University is, of course, being heard in federal court on terms of fraud and racketeering. (Yes, the Republican Party nominated a candidate who is on trial for civil charges of racketeering. And half the country is fine with that)

Would it be possible to produce a better article with more clearly defined criteria?

In the case of these generally private businesses, solid information is as elusive as Trump's tax returns. Only the ones (and there are plenty) that led to lawsuits leave records. The successes the Times lists are mostly golf courses and buildings. A TV show that was good for one season before descending into shoddy formulas, with the manipulations increasingly bald. Are any of these things that made the world better? Not really. What's an example of a business that made the world better? Barbie. 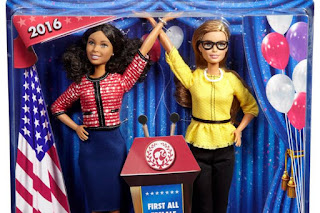 Barbie is on her last legs. We'll miss her.

Trump has only a grifter's measure : Did I make money off it? As he said about his wrecked casinos & the destruction of Atlantic City - one of the times he had a real fiduciary duty - WaPo : (2)

Trump received more than $44 million in salary, bonuses and other compensation during his time at the company, filings show. He also benefited from tens of millions of dollars more in special deals, advisory fees and “service agreements” he negotiated with his company.


Trump’s campaign did not make him available to respond to specific questions about the company, but in a recent Washington Post interview, Trump said he “made a lot of money in Atlantic City,” adding, “I make great deals for myself.”

This is a savage, short tem view that leads to isolation, and the eternal search for the next sucker. The degree to which it's accepted as an acceptable only standard is a gauge of how close we are to chaos.

And the one word in the Levenson TweetStorm that really misses the point - "how" Trump would do as President. How is easy  - by any measure of objective success of the United States as a nation, a community, a dream, he'd be a disaster. The real message of his business record is lost in the listicle. Trump doesn't care whether a business produces anything, whether the people with or behind him do well, whether customers or suppliers get wiped out. The real question is whether there is still, after decades of Republican nihilism, enough heart left in the country to stop him before he  - and the savages he's unbound - destroy the whole notion of government by & for the people.


(1)That gets muddy fast.. People can make anything muddy. I was once stumped by someone's explanation of who owned the 3rd floor apartment in their house. Trump's deposition about who was in charge of the Post Office development is a classic of the genre.

(2) As a follow up - looks like the WaPo might have missed a lot of even worse screwing of investors. legal? No - but within the margin where a failure to prosecute is a judgment call, until they find the bribe.
Posted by Downpuppy at 4:25 PM 2 comments: