When someone you trust tells you about a problem, what do you do? Believe them, and help as best you can. But always, there is the background thought : If I were to see this directly, how would it appear different?

In most cases, when you finally experience it directly, the difference is that it becomes much more intense than described.

When you hear of trouble from some impersonal source, you have to filter. Way too much trouble in the world for any person to deal with. Most people cope OK. Some develop dopey philosophies to justify ignoring suffering; some become saints. We all have to filter.

In the world now, the filtering is being abused to distort facts. Everyone knows how it works : The older you get, the more fixed your worldview, the more you rely on formula, the less on observation. There is a whole alternate reality created, visible to all, but ignored by the sane. Those forwarded emails with the Truth about Obama. About isalmosocialfacism & death panels and turning over the fruits of your labors to Them. You know the whole drill, and you know it's rubbish. Most of the people who believe it know it's rubbish. It's just easy to accept, and to assume that Rupert & Willard are lying to everybody else.

Which is just a recitation as introduction to the question : Who is it they aren't lying to? The easy answer may be : Nobody. They're even lying to themselves, thinking they've constructed this movement as a mindless beast that will lift them to permanent wealth & power, and there will never be a reckoning.

As scary as that possibility is, there's another: Somebody in the back has done the math, and they see this as the way to protect themselves when things fall apart.

As moronic as the austerian arguments seem, what is the real alternative? Consider simple growth policies that would bring Europe & the US back to full employment. What would be the price of oil if industrial output was 5% higher?

I don't have an answer. I don't think it would be possible under steady state assumptions about the makeup of economies. Hence, the people making the arguments about growth vs austerity policies may, despite rock solid cases in economic theory and comparative results, be missing the point. It's no longer about growth & prosperity vs. Hooverism. It's moved to the next stage, fighting over the crumbs.
Sure, there are people who point out that a reasonable society is still possible with changes in lifestyle, getting rid of cars, more equitable distribution of income, etc. And eventually they will win.

But the road there is going to be a tad rough. 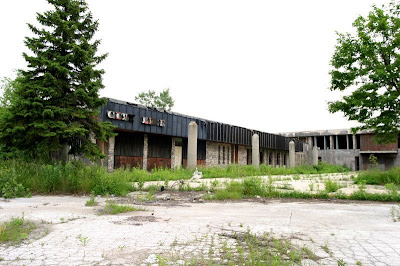 UPDATE : Seeds found & planted. We shall see if anything grows.
Posted by Downpuppy at 7:46 PM

With havin so much written content do you ever run into any problems of plagorism or copyright infringement? My blog has a lot of exclusive content I’ve either authored myself or outsourced but it appears a lot of it is popping it up all over the web without my authorization. Do you know any methods to help reduce content from being stolen? I’d genuinely appreciate it.

Weirdly enough, that exact comment - including "plagorism" has over 2 million hits.

Some virus has gone viral!