A slight pulling of the reins

The success of the overlords in the long term class war depends on patience and stealth. The Nouveaus & the True Believers have their uses, but recently they've been running out of control, threatening to blow the whole project wide open. With economic growth no longer possible, the minion class (mostly 6 figure incomes) have been getting nervous. An important part of the contract has always been letting the Professionals believe that they are special, talented, pure and decent. Making them face reality is never a good thing. This was the week The Establishment got its act back together. A lot of different major stories make sense if you look at them that way.

Teresa Sullivan got her job back at UVa. Woot! She's a thoroughly mainstream chancellor who ran afoul of some Babbits who got above their station. Cord yanked - and people who should have known better are declaiming a Famous Victory. No; just the higher powers throwing a bone to the bought off academics & in the process reminding the hustlers who has the real power. Linda Katehi's job seems to be in no peril whatsoever. 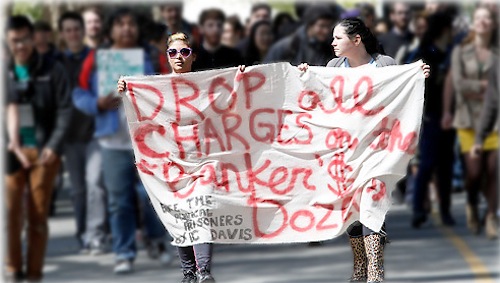 Breaking: John Roberts made the easy call on PPACA, after initially going full wingnut. Roberts is the purest corporate tool in the shed. Taking away the goodies that have already come down from the act - and there have been many - would have been rough.

Turns out Louis Freeh is running a real investigation at Penn State. Paterno & the gang left behind a wide, ugly email trail. The ruling class has no use for people who can't run a decent cover up, unless they wear red beanies.

The sidelight to all this is the Barclay's settlement. They're paying off a half-billion dollars for taking part in a conspiracy to rig LIBOR. The regulators had it set up in the usual way - a small settlement in relation to the amount stolen, a feeble promise not to do it again, and nobody punished. Parliament is choking on that. Should be fun to see what they make Barclays do. As I recall (Kleiner vs FNB Atlanta) one major reason LIBOR became omnipresent is that the "Prime Rate" set by US banks had become a sad joke. Mostly a reminder that the credibility of US Banks was shot 30 years ago. Britain may be trying to salvage something.
Posted by Downpuppy at 7:57 PM