Soylent Green is People, My Friend

I'm sure you all remember the post of September 10, which pondered the possible sales tax and other options that might be hiding in Republican tax policy.

This is the gritty bit, based on the Romney website tax issues page.

However, the reality is that before President Obama exploded the size of the federal government, our existing tax rates were more or less adequate to pay for the government we needed.

The deficit for FY 2009 was $1.3 trillion. There has been no explosion in the size of the federal government. This stuff is total bull, right there for everyone to see.

After, the Big Lie, not much.

Lets consider the entirety of the individual tax plan:

This is about a 25% tax cut. How is it paid for? Damnfino. The only thing in there even hinting at holding onto revenue is "narrow tax base". Sounds like a plan to get more people to pay income taxes. Maybe cut the standard deduction, make Social Security 100% taxable, even tax medical benefits? Probably wipe out the child & earned income credits - gotta hit the moochers. Your guess can't be too wild - because this plan is insane.

How will it be enacted? All revenue bills originate (except when they don't) in the House of Representives, currently run by poop flinging monkeys. 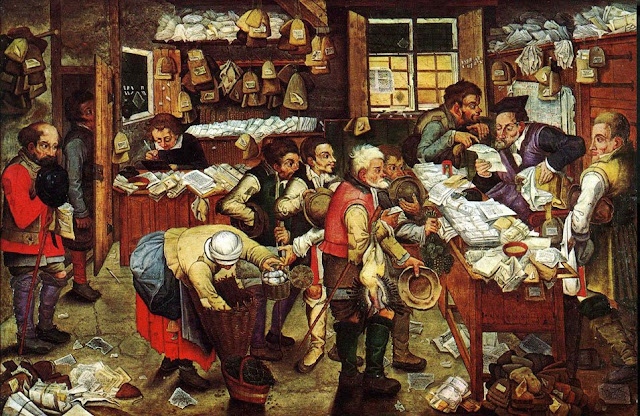 Later on the tax issues page, there's also a link to something by the unspeakably vile Scott McNealy. Scott has a unique place in industrial history. Around 2000, Sun Microsystems was reporting a billion dollars a year in net income, & paying no dividends. Every year, the balance sheet managed to get a bit worse, and Scott McNealy got a lot richer. Now he's at Oracle, as well as plugging for Romney. Anyone with the stomach to click through & read McNealy, you have been warned.

*Romney owed AMT of $232,989 in 2010 & $674,512 in 2011. AMT isn't common at his income level unless (1) almost all of the income is dividends and capital gains & (2) there are substantial miscellaneous itemized deductions, i.e - he's living off investments & paying management fees of a million bucks a year. Part of the reason 2011 was higher was state income taxes. Romney has not released his state returns. The PWC description of them is particularly weird:
""Effective state personal income tax rate" is computed as total state taxes reported as a deduction divided by adjusted gross income as shown on the federal income tax returns as prepared during the period"

I still haven't figured out the timing of this, but it does explain the 8.36% rate in a state (if he was a Massachusetts resident) where the rate has stayed below 6%.

And yes, the 2010 figures are weird. Something happened in 2008/2009, and it seems to have caught him by surprise.  Whatever it is, he doesn't want us to know. Does he just not want us to know that the crash hit him like everybody else? There are way too many possibilities, way too little time to guess.
Posted by Downpuppy at 11:50 AM

No surprises here. The big plan is to starve federal gummint and repeal the New Deal. How? Stop feeding it tax money. Meanwhile, the money and power is increasingly concentrated. None of this is coincidence.

This time it's detailing the lack of details.