Derek Lowe turns 39 in 2 weeks. He's 6-1 for the Indians, and threw a shutout today. The Derek Lowe that appears often in the Atlantic is a drug researcher with a successful drug development record of 0/life. While Megan McArdle is off producing a book-shaped object, various losers are filling in. On the whole, they are less inept propagandists than Blenderella, but are being widely ignored. Which is, of course, what they deserve. So why am I dragging them into the light for the benefit of the dozens of you who will look at this for the pictures?

Because "Make the rubble bounce" has always been the motto here. So let's consider the Manzi/Rossman convergence. The 2 of them have been regaling us with some utterly basic observations on inference, livened only by their nominating each other for Nobels for material any undergraduate should find routine. 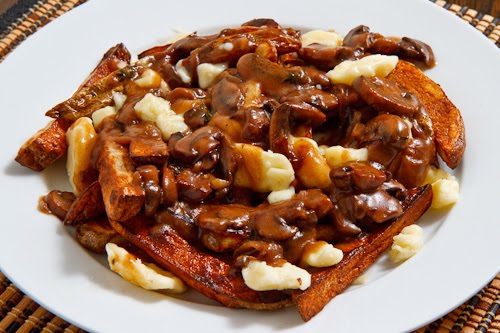 Not that I have any evidence that there is no edible food in Canada. Just that there is reliable data that people really eat this crap. Which is really aboot all that Manzi & or Rossman have to say. Manzi:A physicist generally answers that question by assuming that predictive rules like the law of gravity apply everywhere, even in regions of the universe that have not been subject to experiments, and that gravity will not suddenly stop operating one second from now. Except when they don't. It was the 19th century when physicists started questioning whether laws were universal. In any event Manzi rattles on a bit, never gets around to the problem of what happens when your subjects have read the same stuff you have, or even the basic question of what makes a connection plausible as a testable cause or a likely artifact, and thinks he's said something brilliant. Rossman introduces the notion that correlation might be different in selected subpopulations:

ie, if you select for the maximum of one of 2 variables, it will seem that people tend to have one or the other. ((He managed to mix up whether the vertical axis is intelligence or talent.In which case, Natalie Portman, Ashley Judd, Jodie Foster & She Whose Ass Must Not be Mentioned destroy the point anyhow. At least he wasn't as boring as Manzi talking about pointy shoes.) This is something that non-statistician Bill James was hammering 30 years ago. Anyhow, other than smugness & namedropping, none of this is particularly offensive. So why bother mentioning it? Wellllll, how often have you run into people who simply reject any form of statistical inference? It's not prooooven! they cry. Yes. They're idiots. Think good thoughts.

Update: I hadn't cared enough about the jargon "conditioning on a collider" to look it up, but thanks to the comment, I did. Turns out that Rossman's post was just a regurgitaion of something from 2010 & something from earlier in 2010. After over 2 years, he still had crappy labels on his axes, and hadn't thought them through.
Posted by Downpuppy at 7:36 PM

The Manzi/Rossman observations on inference may (or may not) be "utterly basic," but a glance at the Rossman piece, at any rate, suggests they are not very well expressed. E.g., "conditioning on a collider" -- there's probably a simpler way of putting it, whatever "it" is exactly.

Interesting! It had not occured to me that he was recycling old lecture notes. You'd think somebody given a spot in The Atlantic would trot out their best work.

You would be wrong. These Substitute Megans are really living down to her standards!