One of the features of the attempt to obscure the rather clear findings that Arrhenius was right 120 years ago has been that the paid liars feel free to say or do whatever the fuck they want, while the scientists maintain strict compliance with decency, rigor & truth.

The result of this for Michael Mann is that he's been cleared in multiple investigations. Nice to be cleared, but no fun at all to be persecuted.

He's taken the first little step towards making the bozos stand behind their lies. Mark Steyn called him a fraud & child molester in NRO, and well, given that Mann works at Penn State, them's fighting words. Also too, defamatory.

NRO, of course, did not see reason. Their response is kind of weak. It says that the stuff they wrote is not actionable, but later brags about some of the crap that Dr. Mann has been put through. It rattles on about active scientific controversy - which does not really exist. Outside the moronosphere, there is absolutely nothing controversial about the fact that the planet, particularly the top half where most of us live, is getting rapidly warmer as a result of stuff we do to it. We've already broken most of the records for lowest sea ice area, extent & volume with weeks left in melt season. Greenland has had record melt, there have been thousands of high temperature records, and drought has started to raise grain prices. And Santa has put in pools: 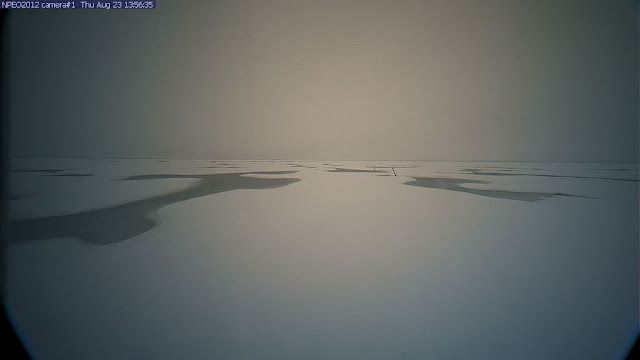 So, as unlikely as it may be to actually get into a courtroom, I'd love to see it. To find that the whole Denialist charade is as lame as the Intelligent Design fools could not be but a good thing. Having these clowns & poo flingers testify under oath is, I suspect, something they are not actually ready for. Ya think?

Free advice (& worth it) : Find a way to sue in Britain. Much better laws for plaintiffs.

Update: Everything I've ever said about Michael Mann, Teresa Sullivan & George Mason U, done much better by Maureen Tkacick at FDL. Also, Wegman, Tozzi & even Ed Meese are involved. DONT MISS IT.
Posted by Downpuppy at 7:36 PM