At 6:49 pm, EDT today, this blog had its 20,000th pageview. Of course, BigTime blogs get that before breakfast. Please don't chortle. I started small, and darn it, intend to stay there.
I'd  like to thank those who helped most - Susan of Texas, Crooks & Liars; and most of all, Kate Beckinsale's Butt Implants.

And, as always at a milestone meterstick, time to return to the core mission: Attempting to bring down the absurd cost of a University Education before I get stuck paying for one.

Which in this case, sadly means having to deal with Megan McArdle. Oddly enough she states a lot of obvious truths. College is wasteful, and getting more expensive. Credentials have no inherent value. We graduate way too many lawyers.

So, simply because it's McArdle, does that mean it's rubbish? Of course it does!

First, to state the bleeding obvious - is going to work in a coal mine at 18 how you want to spend your life? Isn't there value in taking a couple years to get perspective and have a little fun?

Eighteen-year-olds demand amenities—high-speed Internet, well-upholstered classrooms, world-class fitness facilities—and in order to stay competitive, college administrators happily provide them. Then they raise the tuition for which the 18-year-olds are obediently borrowing the money.


Yes! Administrators pay themselves 6 & 7 figure salaries because The Kids Demand It!

Third - Why do people without degrees do so poorly?

Because entitled bozos like McArdle make sure that the Lower Orders are prevented from banding together and claiming a decent wage commensurate with their contribution.
And the chance of really doing well without a degree remains near zilch: 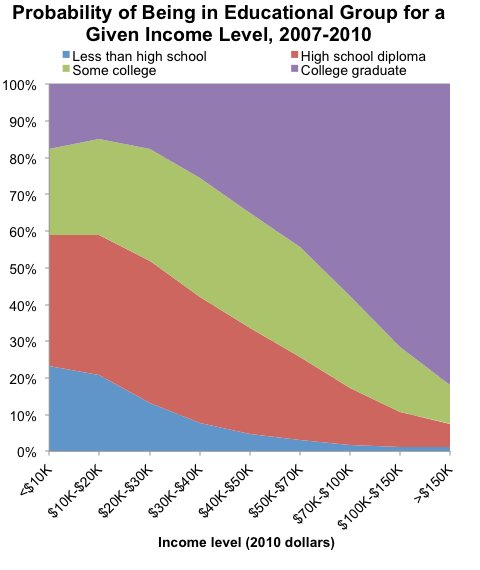 Alas, this is more important than any of that:

China is running on coal. Either they hit the wall soon, or global warming gets Sofa King out of control we go into cannibal meltdown.
Posted by Downpuppy at 7:55 PM

I do not get a lot of hits except when someone links to me (somthing that I don't think will happen a lot in the future). I guess virtue (or snark) will have to be its own reward.

So far, you & Riley have the only sites that have blogrolled this. And you did it when I was still posting twice a year.

Heh, I compare myself to the big blogs, so I always seem small to myself. But I have gone much farther than I ever imagined.