So, like me, most of you have spent the last week enthralled by the emergence of Clown-9 in the Spiderman newspaper version, and Mark Trail's visit to a remote cabin of a murder suspect. If you missed them, you can find them at the Seattle PI, or the Comics Curmudgeon in the links list.

Which was a good thing to focus on as the stock market melted down, stupidity & greed ruled the world, and the net new jobs of 69,000 in May only exceeded the downward revisions of the last 2 months by 20,000. Work is serious.

20,000 is twice the round number of pageviews this site is about to hit after 5 1/2 years of indolence & 4 months of reasonably frequent but pointless posting. Of course, most of those views were people who wandered through here looking for pictures of the buttocks of a 38 year old Oxford dropout. For them, one last picture: 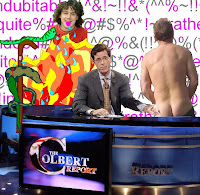 Until 20,000! And hoping like crazy, but not expecting, that the job numbers will have turned. Because we know what needs to be done - hire people to fix & build stuff. Instead, because dumb analogies are easier to repeat than fight, government is cutting back. Because we should listen to our betters.
Posted by Downpuppy at 10:31 AM